I got a habit I just can't quit

I can't believe it's June already...where has the time gone?
Well, here at my house,
it's been taking care of our little seven pound puppy.
It's been a full time job to keep her off her leg for eight weeks
and separated from our other two dogs
which we have been trying to pay attention to also.
It has been hard and stressful for us both,
but I kept trying to remember how
she must feel, poor thing.
Then she not only had the broken leg,
because she was so stressed out she developed mange
and started losing her fur.
And to top it off, a UTI!
But here is the good news...
The cast is off, her fur is back and her UTI is gone! 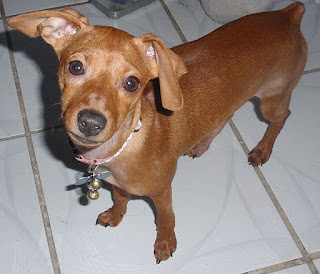 Now she just has a bit of bruising on the leg and we have to get it stronger,
but she is doing well and loving the fact that she gets to be back with her sisters! 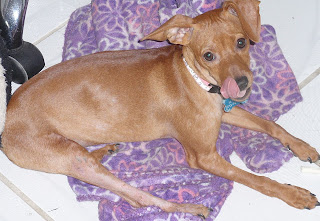 So hopefully I will be able to blog a bit more...
I also HAVE TO remember to schedule posts!!!
I do not know why I have such a mental block with that!
But all I can say is, I will try.

Well, I have not been able to craft a lot lately...
with all the craziness going on it's been pushed to the side,
but I really want to get back in the swing of it soon.
I did do something new and exciting with my nail polish!!!
I even remembered to take pictures to share with you!!!

So I used to have my nail polish in our bathroom.
My sweet hubby made extra shelves for me to have more room.
Here's a picture of how they were. 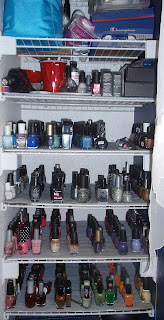 It was great for a while...had them by color and it served its purpose.
But then hubby and I started talking and I realized that I was not using the
polish I had in the back because I could not reach or see them.
So we kept throwing around ideas...hubby even suggested for me to get those racks you put on the wall...what a guy!!!
But then I started to count how many I had, and there was no way I was going to use racks on the wall...I would need too many!!!
Ikea came through for us.  I researched online with many of my nail polish gurus and it was a toss between the Alex and the Helmer.
I decided two Helmers would be perfect and cheaper than one Alex.
They were so easy to put together too! 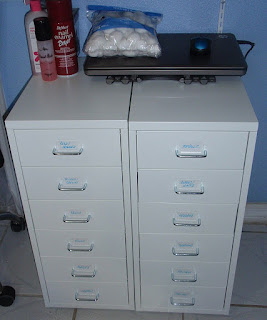 I was able to separate by color...and even put my nail tools and nail art stuff in their own little drawers!
And the best part...I have more room for more polish.
Don't tell the hubby though! LOL!!!

Since I was lucky enough to have a new place for my polishes,
I was able to find my Pacific Blue and paint away!!! 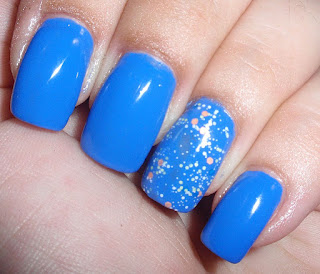 Oh how I have missed my Pacific Blue!!!
I also purchased recently, the new glitters (Graffiti Bomb/Fiesta)
from Sinful Colors and added Baila, Baila to my accent nail.

I will show you next time all the ones I got and try and swatch them for you.

They are actually pretty good!

Ok, I think I caught up with everything going on and will try and get something up here again soon.
I will leave you with this cute picture of Bella getting caught on the couch (she was) sleeping with a duckie...LOL!!! 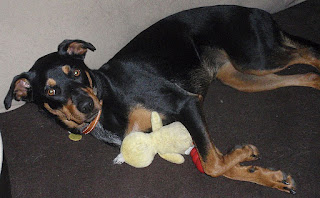